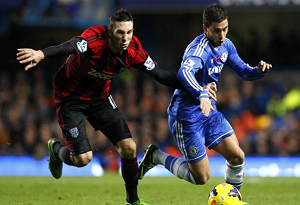 Today, Murinho takes his players at the Hawthorns, with the Premier League already won. It seems there`s no pressure for this game in particular, Chelsea having already assured their place and Bromwich also being champions of their League, knowing alredy for a fact that they will be playing Premier League football next season, so they`re not looking to win the points.

If Chelsea would be the winner of todays encounter, would be the 26th win for this season, and Murinho would be very happy, as he seems so eager to win it all. Wouldn`t be a surprise, if that happened, but maybe we should consider also the fact that 3 of his midfielders, who did most of the work this season, are simultaneously training for the Copa America also.

West Brom have a complete team to choose from as Callum McManaman has fully recovered from his foot injury. Saido Berahino and Brown Ideye are willing to start, after being named on the bench in last week’s 1-1 draw at Newcastle.

Chelsea striker, Diego Costa is ready to return, recovering from the injury he suffered and kept him away from playing the last six games, while for Ramires, Kurt Zouma and Oscar, the season seems to be over, due to injuries, announced the manager Murinho.

With the table showing 84 points for Chelsea and 41 for the Albion, we might say the odds are on Chelsea, not mentioning the thirst of the Chelseas manager, to reach 90 points. They are surely willing to try their best at the final two games against Sunderland, playing at Stamford Bridge on the last day of the campaign.