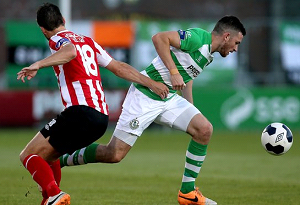 Shamrock Rovers, undefeated as they seem, are surely hoping to maintain this first-rate start of their Irish Premier League campaign playing the game against Derry City, this evening, at the Derry City stadium.

They had a very smooth, impressive start and had great results this season, considering unquestionable victories and even convenient draws.

Derry City on the other hand, had a tough start this campaign, struggling to have positive results in the opening fixtures of the season. However, an impressive EA Sports Cup win over Sligo Rovers has given the Derrys some of that much needed selfconfidence and good spirit, to face the future matches of the championship.

The last time they met, at the Brandywell, Derry City and the Rovers, finished the game with a disappointing draw, for the Derrys who were hoping to take away the three points.

Anyway, it has been a flat game, with a slow start and a great part of the first period, continued the same way, with no trace of dominance from neither sides and we can`t talk about real chances created, either. The only real chance of the first half, was when Barry McNamee had the opportunity to score, opportunity that vanished after Patrick McEleney intervened.

The second period instead, started in a much brighter light, there were some moments when the Derrys seemed to show some dominance, even if briefly, some action in the middle of the field and a chance to score for the Derrys after the 58th minute, some drama at the very end when Keith Fahey was sent off after receiving his second booking for simulation and also David O`Connor, failling to score when given the chance, missing Doherty`s net.

An overall view, we can say it was a fair result, even if Derry did hope for better.

Today, the table shows Shamrock Rovers are positioned on th 3rd place on the Irish Premier League with 27 Premier points, while Derry City holds the 8th place with 13 points only, so i guess it would be fair to say the odds are on the Rovers.